The newly proposed eligibility criteria for a revised SEVS (Special & Enthusiasts Vehicle Scheme) are so restrictive as to make it clear that the changes proposed would effectively close the scheme altogether and with it the Used Import segment of the Australian car market. The department overseeing SEVS which is currently self-funding, if the proposed changes are implemented, would quickly become unsustainable. Obviously these kinds of policy proposals are not drafted by mistake, the message is clear - those who would rather see grey market imported vehicles banished from Australia have a position of influence with policy makers.

In its response to the 2014 Review of the Motor Standards Act, the FCAI (representing the big end of town in Australian motoring) took aim at used grey imported vehicles, greatly exaggerating the risks of opening up current programs by making factually inaccurate statements which were then repeated ad nauseam by journalists whose work travel itineraries are paid for by it's members. Without doubt this scaremongering has also been used extensively to convince policy makers against any relaxation of laws that would allow grey market imports to in any way threaten the profits of their members.

Since the claims fall into an area in which we specialise, and since Japanese History Check has been heavily involved in bringing these matters to the attention of authorities and the public, we feel it is important to frame them in some context.

Let's take a look at what the FCAI had to say about grey market used imports with particular respect to odometer tampering and vehicle history in November 2014:

The federal and state/territory governments have introduced a range of initiatives aimed at reducing consumer risk in the purchase of second-hand vehicles including:

Using these government records and other recorded information, a number of web-based products are available that allow a prospective buyer of a used vehicle to reduce their risk of unknowingly purchasing a stolen, rebuilt or otherwise damaged vehicle. For example, ppsr.com.au offers a Car History Report that provides:

This level of information is not available for grey and/or parallel imports (including personal imports). While the original owner might be well aware and willing to take the risk, there is an issue over the impact on the subsequent owners of the vehicle.

Being that the vast majority of grey import vehicles destined for Australia come from Japan, a nation with an extremely well developed automotive sector, the assertion that this information is simply 'not available' is an extraordinary claim. Not only does FCAI make this claim, they also seem to be big-noting local protections available to consumers in the Australian used car market. Does the FCAI really believe that Australia's odometer roll back and stolen vehicle detection systems will stack up when compared to that of Japan? 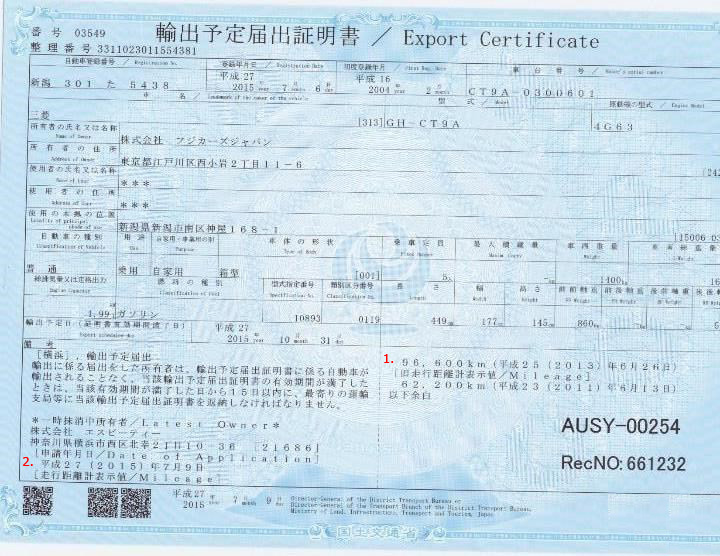 Of the points outlined, two are made irrelevant by the requirement of a single document from Japan - the Export Certificate. In order to export a vehicle from Japan, it is required that the current owner visit an MLIT (Japanese government transport authority) office and apply for permission to export the vehicle. In order to prevent the problem of incumbered or stolen vehicles from leaving Japan via normal channels, the Japanese government require this document, it is illegal to export a car without it. In Australia all used imports must be fitted with a compliance plate prior to registration. The RAWS compliance workshop is required by law to keep on record the Export Certificate, details from this document are used by the Canberra based department which manages SEVS in order to issue a compliance plate for the vehicle. By requiring this document also in Australia, any vehicles arriving via unusual channels are automatically excuded from compliance and therefore unable to be registered for road use.

Therefore of the information "not available" according to FCAI, the 'Financial Interests Check' and 'Stolen vehicle check' have already been covered in relation to all ex-Japan vehicles imported to Australia under SEVS.

In regard to written off vehicles, this is also covered under SEVS, which has an extremely fussy set of regulations requiring that no damage has occurred to any structural components (even if repaired), no unrepaired damage exists to steering, suspension or body panels affecting the seams or joints. Also it is a requirement that no rust be present on any of the structural components of the vehicle. These rules exclude cars with even moderate accident damage, let alone those that would be considered an insurance write-off. The fact that a minority of RAWS workshops have blatantly ignored the requirements of the program does not mean the system itself is broken. It is a fact that the department responsible was made aware of specific examples of these issues several years ago. This is a simple auditing and enforcement issue, which has been mismanaged by the department overseeing SEVS and is easily fixed.

Next, lets deal with the 'odometer roll back check', an issue which has plagued the import scene in Australia for many years. The reality is that local protections in Australia focused around prevention of odometer tampering within it's local used car market are weak. The system that FCAI is selling as the answer to reducing risk to Australian consumers is in fact a mish-mash of government and private sector databases, based on source data that is in many cases not collected in an official capacity. Due to the inconsistency and lack of transparency for the general public around the collection of this data, how effective this system actually is, is entirely questionable. In Australia, there is no national requirement around the recording of dated mileage readings, each state has a different approach and none of them do a good job - here are some examples:

In addition to these government databases, certain checking services also integrate access to private sector data - returning mileage records based on website sales advertisements. Obviously it is hard to consider these records as 'official' given they have been provided to a car sales website by the owner with the intention to sell the car. Another obvious issue being that not all vehicle sales websites participate in feeding data to the system.

Due to inconsistency and unavailability of mileage data for used cars in Australia, in many cases it is impossible to determine whether or not a vehicles odometer has been tampered. Of the records that do exist, the Australian public is afforded little or no access and as such the local systems designed to weed out odometer fraud have had little scrutiny. These issues were outlined in detail by Veda Advantage (owner and developer of the 'Car History' product) in its 2009 submission paper on 'Lemon Laws' and since this time, little has changed at the state or national level. What is clear is that consumer protections against odometer tampering within Australia's used car market are woefully inadequate.

It's convenient for FCAI to point at history problems with regard to used grey imports when it's own members are subject to significantly less scrutiny. It would be a bridge too far to suggest that there is not a problem with odometer tampering within Australia's locally delivered used car market. The data is simply too scarce to make any reasonable assessment as to the extent of the problem. With such weak protections in place, it's likely to be a much bigger problem than the average Australian consumer realises.

Conversely, it is precisely because of the excellent systems Japan has in place to prevent this type of activity that so many examples have been exposed within the Australian market. Here's why:

In 2004 the Japanese government introduced a mandatory requirement for mileage to be recorded at every registration renewal, which is bi-annual in Japan. Unlike Australia, this system is NATIONAL, not state or prefecture based, meaning it is consistent. Not only, did they begin recording, they also made it possible for any member of the public to walk into an MLIT office and request an official watermarked certificate on which is printed the last two dated mileage readings at the time of renewal (registration certificate). The system is managed by a government agency, it is well documented in Japan and is transparent.

In addition to this consistent and transparent system being in place, Japan also hosts the largest and most sophisticated system of used car auctions in the world. It is the case that vast majority of used cars exported from Japan are channeled through these auctions due to the fact that local Japanese used car dealerships are not set up for, and have no interest in servicing foreigners. For the internationally based consumer, the key output of this auction system is the auction sheet record. Prior to going under the hammer the two-part sheet is completed, firstly by the current owner of the vehicle, who notes the key selling points about the vehicle, notes on modifications etc... and secondly by the auction inspector. The auction inspectors role is to look for and note down any repaired or unrepaired accident history, record the current odometer reading, make notes on the condition of the vehicle and give an overall grading relative to other cars of the same type. This auction sheet is then made available to members of the auction to read and analyse in preparation for bidding. Since many of these vehicles are purchased with the immediate intent to export, the auction sheet is invaluable in recording the final mileage prior to export as well as crucial details about condition and accident history. The auction sheet further de-risks the consumer against odometer rewinds and flood and storm damage. In addition, pre-export vehicle inspection services are offered by several well reputed organisations in Japan should there be any doubt. 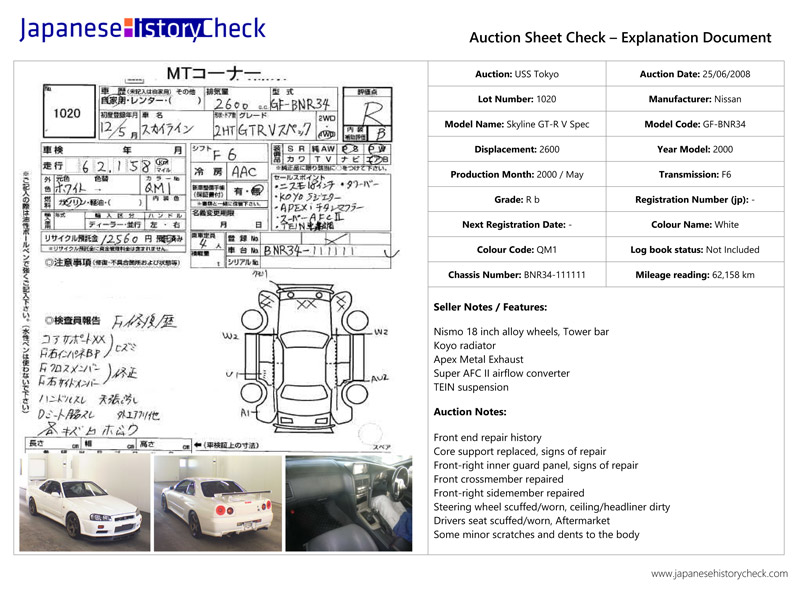 What this amounts to is that if you as a consumer take the time to understand the Japanese system, and you carry out the checks available, the information available to help protect you from buying a written off or tampered odometer grey import is of a much better quality than information available about locally delivered used vehicles in Australia.

Over recent years JHC amongst other community members, industry insiders and fair trading bodies have put considerable pressure on dealerships engaged in these activities within the grey imports space. A portion of the industry was highly successful in pulling the wool over the eyes of the Australian consumer. The damage done to the industry by these few was severe. After significant efforts to obtain assistance from authorities we have finally seen meaningful action against many of these dealers in 2016.

When it comes to grey imports, the landscape amongst dealers in Australia has changed markedly over the last 3 years. Australian consumers are more aware about the possible dangers and the checking mechanisms available for used imports. Several dealers have cleaned up their act, and many other dealerships now actively market documentation with their cars. The clean-up is not complete, and consumers still need to be wary, but the reformation is very noticeable. With the formation of an industry association in AIMVIA, this tiny industry has taken a further step to 'clean up shop' and legitimize itself as an option for car enthusiasts in Australia.

Obviously we are talking to only one facet of a much wider debate, however it would seem a shame to shut down a relatively small group of businesses, very much on the road to reformation, who have on the whole, a very good offering for the car enthusiasts living in Australia.

Are you a car enthusiast living in Australia? Help save the Imported Used Vehicle industry by signing this petition and make your voice heard!