When used cars cross international borders, keeping track of their history can become extremely difficult. Japan exports used cars to countries all over the world, the laws governing the import of these cars can vary per country. In Australia, despite having a strict system of legislation and regulation, vehicles with serious accident history and/or odometer discrepancies continue to be sold to unsuspecting consumers.

In this article we take a look in-depth at a real life example of a heavily damaged vehicle, sold in Japan, repaired, then imported into Australia for some serious profit.

Let's work backwards, take a look at the car as it is currently advertised for sale in late October 2014: 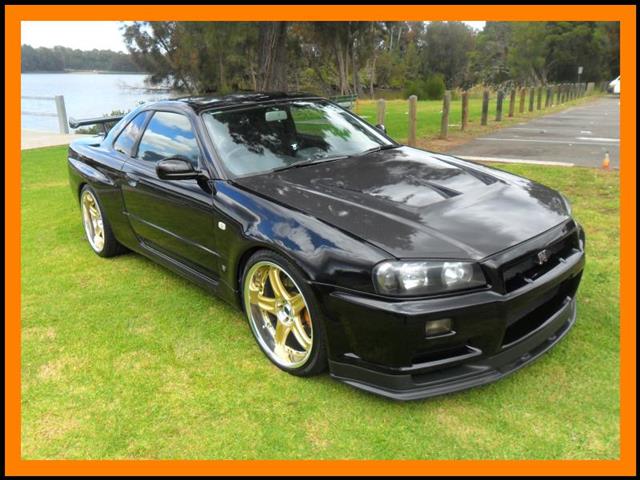 These days Skyline R34 GT-R's are an iconic car, prices for clean, low mileage examples continue to escalate worldwide. The fact that this car is a genuine V-Spec 2 further enhances the value. Recent, good condition (grade 4+) examples in Japan with similar mileage have sold at auction for around 4.4 million yen. This equates to just over $60,000 AUD by the time you pay FOB, ship the car and comply it in Australia. This is not a clear case of "if it seems too good to be true...", the dealers asking price is cheap, but is roughly consistent with a high quality, low mileage example.

The dealer has posted two very important photos with the advertisement:
1) The photo of the purple Australian compliance 'plate' (sticker). You can clearly read the Australian VIN, which includes within it the Japanese chassis number: 6U9000[BNR34401309]. 2) Some Japanese servicing stickers which are dated and include mileage readings. The middle sticker (yellow) says that the car was serviced in October 2003 and would be due for another service at 30,484km. The top sticker (white) says that the car was serviced in December 2012 when the odometer read 62,154 and would be due for it's next service at 72,154. The dealer is trying to demonstrate that the mileage is legitimate.

To check the mileage we've pulled a copy of the Registration certificate from the offices of MLIT in Japan (more info here). This will get us the mileage at the last two times the car was registered in Japan. In Japan, cars can be registered for 3 years from new, and at 2 year intervals after that, mileage is recorded as part of the process. The Japanese implemented this system around 2004. Here is the Registration certificate for the vehicle in question: NOTE: When you order a check with us we provide you a full english translation of the above document as part of our service. For the purposes of this article, here's what you need to know:

MLIT only make available the mileage at the last two registrations. This certificate in combination with the servicing stickers effectively prove that that the mileage of this car is genuine.

The car has an Australian compliance sticker which should mean you can assume the following:

So, everything stacks up, this car appears to be the real deal. It has legitimate mileage, with service stickers and official government registration history as proof, possibly the dealer even has the Japanese logbooks too. It has an Australian compliance plate, so any accident history should be relatively minor.

A standard odometer checking service will get you this far only, the odometer is verified, the car has been through Australia's stringent compliance process, are you ready to buy?

Per our comprehensive service we got hold of the auction sheet and accompanying photos for this car. The car went to auction in April 2014 at USS Tokyo, lets have a look at what the car looked like then: WOW! That's a pretty decent front-end smash. Perhaps even an insurance write-off?? With so much damage, surely structural components of the car are requiring repair...? Be sure to note that the chassis number matches exactly the one on the compliance plate photo above - [BNR34401309]

But the story doesn't end there, the car returned to auction at USS Tokyo in July 2014, repaired and ready for roll-on roll-off shipping to a country where it's extensive damage history would be difficult to trace! Let's see what the auction had to say about the damage and repairs. The auction has given the car an R grading indicating the car has repaired accident history. You can clearly see the XX markings on the front panels and bonnet to indicate these components have been replaced. Here is a translation of the auction notes which we highlighted with a red box:

We've highlighted in purple the four structural components of the car that have been repaired and should therefore have prevented the car from being complied in Australia in October 2014. Indeed, this car had a sizeable smash and required significant repairs.

Those with a keen eye for detail will notice that the auction has noted the car has had a meter change. As per the standard auction process, they have put a $ sign next to the mileage and listed the total mileage. The cluster was swapped out for a 320km speedo in May 2001, not long after the vehicle was sold new. The mileage on the old meter is listed as 462km, so this doesn't make a huge difference to the overall result.

As you can see, Registration checks are useful to confirm mileage, but potentially give only half the story. When looking at buying a used import it's crucial to get hold of BOTH the registration certificate AND auction sheet! This is exactly what our comprehensive service delivers.